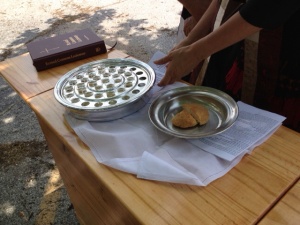 (Photo taken at a Church Without Walls service.)

There is no doubt in my mind that many sacred things are happening around us at any given time. They may be small, almost imperceptible events. Or they may be life-changing, seminal happenings.

I am also convinced that I often miss them, even when they unfold right before my eyes. When I do get to notice one of those special moments — when grace breaks in — it is humbling. It is a gift given me, this opportunity to witness hope being born, to witness the love that calls forth love.

A couple of weeks ago at street church (churchwithoutwallsjax.com) one of our regular congregants — a man who is highly delusional yet unexpectedly resourceful as he navigates life on the street — approached me just after our service had ended. Usually, he comes with a litany of words that, in spite of being intricately woven together, make not one wit of sense to me. But this time was different. He came right up to our altar, standing across from me as I took care of the vessels from communion. I had just announced that we could use help consuming the consecrated bread that still remained. He said nothing as he stood there, his head bowed.

“Did you want to help us finish the bread?”

He nodded slightly. “I want the prayers, too,” he said.

It was startling to hear him voice an articulate thought.

“I missed it before…” He appeared to be referring to communion a few minutes earlier. Apparently lining up with the rest of the congregation was too overwhelming.

I broke off a piece of bread and lifted it up. “The body of Christ, the bread of heaven.”

He took it in his hands and said a prayer before consuming it.

I held up a cup of consecrated juice: “The blood of Christ, the cup of salvation.”

He took the cup, uttered a beautiful prayer and consumed it.

In those brief moments, when he was drawn to the body and blood of Christ, he was lucid and calm.

Then as quickly as he appeared before me, he darted away, but with the promise that he would be back. The Word, he explained, is what he hungers for.

3 Responses to Grace breaks in.