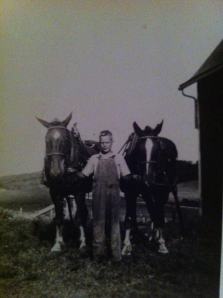 (Photo of Dad taken on family farm in Wisconsin.)

This broken world needs people of prayer but it also needs people of action. My Third Order Franciscan friends have it right when they affirm a call to service that includes not just prayer and study but work.

There is much to be done and thankfully we have wonderful examples of how simple acts of courage and obedience can make the world a better place. Tonight my father will receive the Distinguished Alumni Award from Duke University honoring his tireless work as a judge, mentor and leader in education and the wider community. I am proud of his courage and his tireless commitment (refusing to retire and relax, he is the longest serving judge on the federal bench). In the early 70s, he stood courageously for equality and justice for all people when our county school board defied the federal government, refusing to desegregate.

He will be in good company as he receives his award. Paul Farmer, founder of Partners in Health, is a past recipient, who has fought to end infectious disease in third world countries – defying a greedy system that finds such work unworthy because it is not easily profitable. William Styron also received the award, not only for his immense commitment to literature but for his courageous voice in naming and describing his own personal journey with clinical depression. His courage in making “darkness visible” has inspired countless others to find assistance and has helped erase the stigma of mental illness by raising awareness of the depth and reach of this disease.

These are each amazing individuals, perhaps with little in common. But each one has embraced moments of grace, when they became willing to stand and to act in the face of immense, seemingly insurmountable obstacles. If we were to delve into their personal stories, we would find individuals who are deeply flawed, just like the rest of us.

The One who created us all is not looking for remarkable individuals. He is not waiting for us to get our respective acts together. He is waiting for us the take that leap. To get into action despite evidence or pressure to the contrary.