What we are made for.

Hoping against hope, he believed that he would become ‘the father of many nations’, according to what was said, ‘So numerous shall your descendants be.’ He did not weaken in faith when he considered his own body, which was already as good as dead (for he was about a hundred years old), or when he considered the barrenness of Sarah’s womb.  No distrust made him waver concerning the promise of God, but he grew strong in his faith as he gave glory to God, being fully convinced that God was able to do what he had promised. (Romans 4:18-21)

Last week I attended a clergy retreat that focused on forgiveness.  Our leader, Father William Meninger, incorporated times of silent and guided meditation, and then for the most part shared a series of stories, illustrating the journey toward forgiveness.  He was wise to describe forgiveness as a process that happens over time rather than a single act or decision.  While it helps to decide within ourselves that we are going to forgive some person, group or institution that we feel has wounded us, it is likely we will need to make that decision again and again, possibly even renewing it one day at a time. 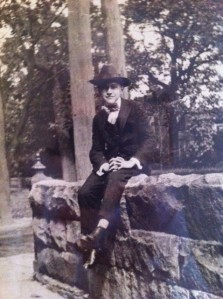 My grandfather Joseph Thomas Pfohl (“Joe Joe”) was an incredibly kind and loving man.  I cannot remember his ever uttering a harsh word to or about anyone.  My grandmother, on the other hand, was proud of her cocktail napkins that read: “If you can’t say anything nice about anyone, come sit by me.” She felt that Joe Joe’s family had wronged him somehow and that it was her duty to carry and nurture bitterness for him.  Thankfully, very late in her life (she died one month shy of her 97th birthday), she managed to let go of this load.  She managed to forgive.

As children, my brother and I rode beside Joe Joe in the front seat of his shiny black Buick.  He drove slowly, taking care to toot his horn and wave to anyone on the road or walking on the sidewalk.  The neighbor kids got a kick out of this unusual degree of friendliness, and, as we got older, my brother and I found this a little embarrassing.  Such comprehensive kindness was more the norm back in small town North Carolina than in Jacksonville, FL.  Whenever we drove through the North Carolina mountains, Joe Joe would stop at every mom-and-pop store or filling station and visit with the owners.  He genuinely wanted to know how they were fairing. Joe Joe couldn’t be any other way.

I learned as an adult, long after my grandfather’s death, just how giving he had been.  For decades he led the band at the Home Moravian Church in Winston-Salem.  He mentored kids and recruited many to play in the band. This often meant finding a used instrument for them and then patiently teaching them to play (Joe Joe could play anything).  The downstream effect is incalculable, but I have had occasion to become acquainted with a man he impacted greatly.  This man, Wesley, is a life-long Methodist who still plays in the Home Moravian Church band.

When I first met Wesley I didn’t know of his connection to my grandfather.  I only knew that he was gracious enough to look after my grandmother, simply as a kindness, expecting nothing in return.  When I asked him what motivated this, he shared the story of meeting my grandfather.  Wesley was a young boy from a poor rural family.  Joe Joe was helping to establish a mission church outside of Winston-Salem, when he found Wesley and asked if he’d like to learn to play an instrument.  Joe Joe refurbished an old trumpet for him and the rest is history.  He attributes his success to Joe Joe’s consistent interest and attention.  Wesley was the first in his family to attend college.  It is impossible to count the number of children that Joe Joe reached through his ministry of love, embracing those in his midst and teaching others, by example, to do the same.

Jesus tells us to love our enemies, that if we do this, then ultimately we will be perfect as our heavenly Father is perfect (Matt 5:44-48).  Our retreat leader spoke of this call to love our enemies.  Sometimes it sounds like Jesus is asking us to do the impossible, that we are doomed to failure.  And we are.  Like Abram, we are as good as dead.  It is then that we turn to God, trusting God to do the impossible, to breathe life into lifeless bones, to breathe love into hearts that have been tainted by human envy, jealousy, pride and suspicion.  God tells us to love our enemies precisely because that is the only language God, who is Love, knows.  There is no life for us in anything that is not love, because love is what we are made for.